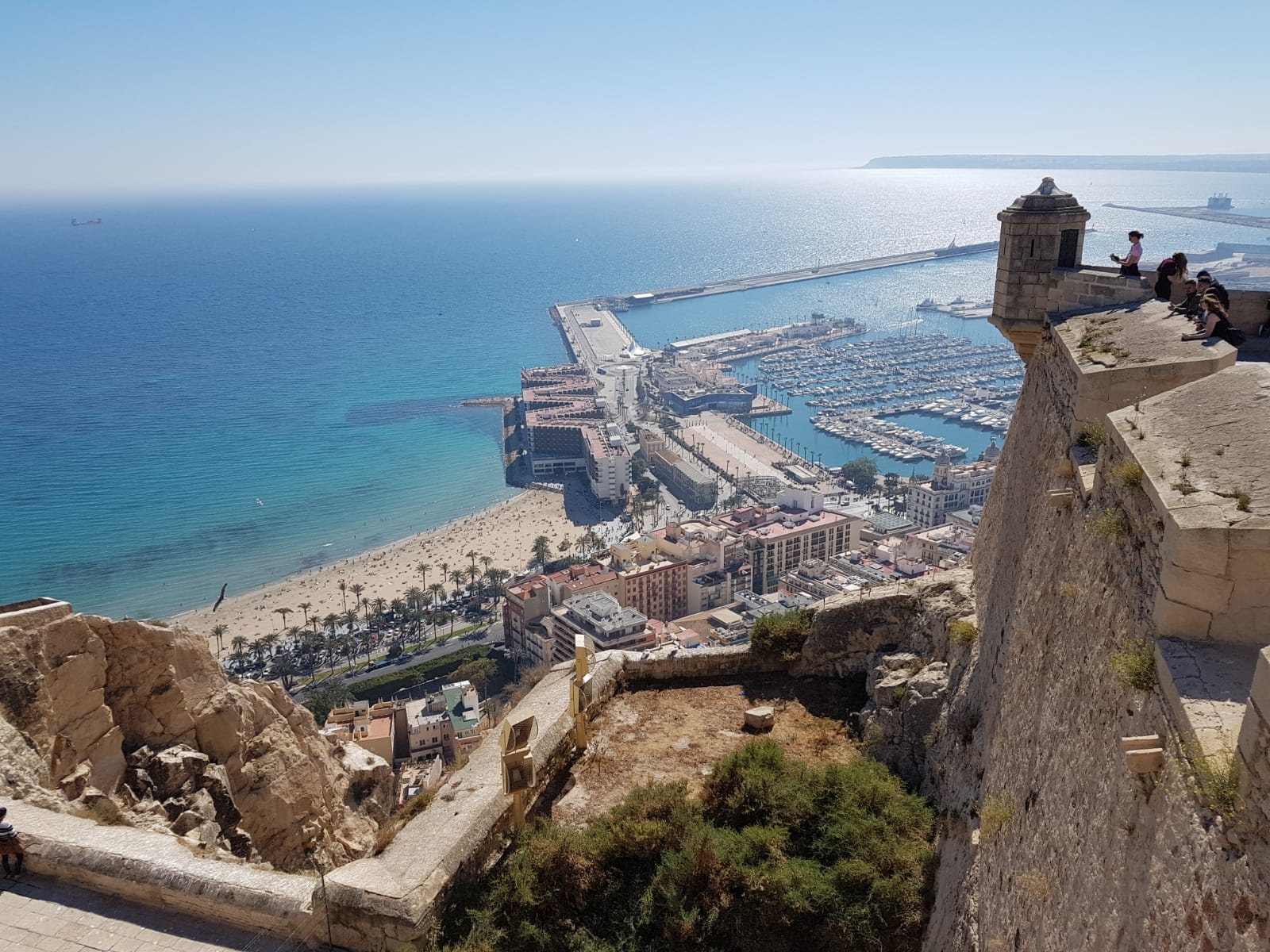 The Castle of Saint Barbara is located on the rocky mountain called “Benacantil”, 166 meters high. It was just impossible for me not to climb there as I am a big fan of beautiful panoramas. Moreover, its history is just amazing!

The castle was built at the end of the 9th century, which is followed by a period of Muslim rule. However, there were some foundings for the Bronze Age and Roman times. On December 4th, 1248, Prince Alfonso Castilian, and later King Alfonso X, took the castle from the Arab’s hands and that is how it gets the name of Saint Barbara. How interesting! Due to its strategic location, the “Castillo de Santa Bárbara” has served primarily a defensive and military function for centuries, and as a multiple targets of attacks, it has often been renovated and rebuilt. The first major reform of the castle was carried out in the years 1562-1580 by Philip I, son of King Charles I. He ordered the construction of most chambers, which you can admire to this day. The last military attack on the castle took place in 1873, during which the rebels from Cartagena bombed the city.

I would really recommend climbing this mountain! Spanish people would say that ¡vale la pena! – it is worth it. Currently, the castle is divided into three different zones. The first of these, called “La Torreta” is the highest of all, and you can find the oldest preserved part of the castle, i.e. basements created between the 11th and 13th centuries. In the middle zone you can visit the most important chambers finished in 1580 – “Cuerpo de Guardia” (Chamber of Guards), “Baluarte de la Reina” (Fortress of the Queen) or “Salón Felipe II” (Philip’s II Salon). The lowest zone comes from the eighteenth century and includes the “Revellín del Bon Repós” (the Rawelin of Good Rest, now serving as a car park) and “The Statue of Felix Berenguer de Marquín”, the famous inhabitant of Alicante, general captain of the Philippines and viceroy of New Mexico. What’s more, the castle has “MUSA”, a free city museum, where exhibits related to the most important moments in the history of the city of Alicante have been collected and exhibited, and various workshops and shows are organized.

Oh, I can´t forget about one more thing – the “Castillo de Santa Bárbara” also has its own legend, which history is set in the precisely during the reign of one of the beloved caliphs. He had a lovely and an extraordinarily beautiful and wealthy daughter Cantara. Many lads fought for her love. Two men were selected from all the entourage – Almanzora, a famous general from Cordoba, and Ali, not so clever on the battlefield, but an extremely handsome boy with a romantic soul. Unable to make a choice, the caliph decided to put the youngsters on an unusual test. They were to make a heroic act that would impress the ruler himself. Almanzor decided to go to India to create a trade route and bring silk and other luxury goods from there. In turn, Ali chose to open a channel that would bring water to the city from the area of ​​Tibia. Thanks to this he remained close to the princess, with whom he spent every free moment and in which he fell in love with madness. Romantic gestures and gifts soon stole the heart of Cantara, who reciprocated the feeling of Ali. However, soon Almanzor returned from his trip, whose caliph announced him the winner. Desperate, Ali decided to throw himself off the rock. When he did, the ground opened and water began to spurt out of it, filling the lake that today is called Tibi. When Cantara found out about her beloved’s suicide, she jumped from despair into the abyss from the rock that has since then been called “Salto de la Reina Mora” (Moorish Queen’s Jump). Shortly thereafter, the caliph himself also died of grief.

Residents of the city, moved by a sad story, decided to commemorate the lovers, giving their city a name in honour of Ali and Cantara, so that the symbol of their love would last forever (this is the legend of the name of the city, the true origin can be found in the article “History of Alicante´´).